DALLAS — #MeToo, #ChurchToo and clergy sexual abuse and misconduct were the focus CBF Executive Coordinator Suzii Paynter’s report during the Thursday morning business session of the 2018 General Assembly in Dallas.

“Look around. This is not an isolated incident,” said Paynter, as nearly half of attendees stood in recognition of their connection to incidents, victims or survivors of clergy sexual abuse and misconduct.

“This is worth the honor and work of church leadership.…If you are a man in ministry, if you are a layperson in leadership in your church—don’t wait for women to demand training; be proactive. If your church is free from this wrenching legacy, do something to keep it that way. If your church has suffered this wound, do something—more than denial—to ensure protection for the future to break a culture of complicity.”

Paynter challenged Cooperative Baptists to “let this moment of #MeToo prompt us to give all the time, the priority and compassionate Samaritan response that Jesus requires,” citing the biblical model of assistance to a victim as demonstrated in Luke 10:30.

“This model of Samaritan care and investment in restoration should be an example for congregations and leaders, and is modeled in CBF Moderator Shauw Chin Capps, who serves as the CEO for Hopeful Horizons, an organization committed to support victims of violence and sexual abuse in Beaufort, S.C.,” Paynter noted.

Capps joined Paynter in urging Cooperative Baptists to listen to the stories of survivors and take steps toward bringing about social change, telling the story of a gathering of three victims of clergy sexual abuse with Capps and Paynter in January of 2018.

“When asked what they wished to see happen from this meeting,” Capps explained, “they all expressed a desire and hope that Baptist organizations and churches could have policies in place that would protect others within the organization from the harm they have experienced. …They all stated that this is the first time they really felt heard and felt hopeful.”

These stories are difficult to hold, Capps added, and the history of abuse within Baptist churches is one that we all prefer to forget, but one that must be brought into the light. “While we cannot change the past,” she said. “We have every opportunity to set a healthier path for the future.”

A new video and resource to educate churches about clergy sexual misconduct produced by the Clergy Sexual Misconduct Task Force of CBF and Baptist Women in Ministry will be previewed in a workshop titled #churchtoo at 1:30 p.m. on Thursday. The educational video and church policy guideline resource is titled “Safe Churches and Ministers” and will be made available to churches and lay leaders in the coming weeks.

CBF Past Moderator Doug Dortch delivered a report to attendees about the work of the Governing Board over the past year, focusing on the board’s adoption of a new hiring policy and announcement of an implementation procedure. Dortch invited attendees to a Friday panel discussion at 3 p.m. to hear how several CBF congregations are addressing matters of sexuality in their own contexts and how these churches have responded to the actions of the Governing Board.

“Regardless of where you or your church is on this particular matter, no one is going to ask you to leave,” Dortch said. “If anything, your Governing Board is committed to making space for you to be a part of what the Spirit of God is doing in us and through us—a commitment that stems from Jesus’ high priestly prayer—that we all may be ‘one.’” 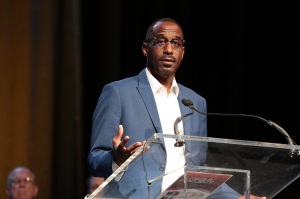 The goal of The Angela Project, said Cosby, is to set a new trajectory for racial justice in America over the next 400 years, striving to “make right what has been made wrong for so many years.”

He challenged the Assembly to join in this crucial work as the Angela Project will convene in September of 2018 and then during the CBF General Assembly in Birmingham in 2019.

The CBF Foundation honored three recipients with awards for their contributions to the work of the Fellowship. Gary Skeen, president of CBF Church Benefits, was recognized with the Patricia Ayers Award of Excellence for his commitment to generous giving and longtime leadership. Skeen, who retires later this month from CBF Church Benefits, served as Chief Financial Officer of CBF from 1994-2000 and assisted in forming the CBF Foundation and has introduced many donor clients to the Foundation.

The inaugural George Bowling Award of Excellence, named in honor of the late CBF Foundation trustee, was presented to former CBF field personnel Bob and Janice Newell and to the PORTA Albania House in Athens, Greece, which ministers to refugees and immigrants as well as other populations. PORTA—a ministry launched by the Newells—celebrates its 10th anniversary this year and will be recognized as a CBF Global Missions Legacy Partner on Friday morning.

The General Assembly also heard a report from Bo Prosser of the CBF Ministerial Excellence Initiative as well as the Ministries Council, which recently awarded grants to bolster church-community connections. The 2018 grant recipients include:

The Governing Board also presented and moved the adoption of the 2018-2019 missions and ministries budget of approximately $14.5 million for the upcoming fiscal year, which begins October 1. Nominees were also presented for all of CBF’s governance bodies (list of nominees here). The budget and nominees will be voted on during the Friday morning business session at 9:30 a.m.

A motion from Wesley Spears-Newsome of Greenwood Forest Baptist Church in Cary, N.C., was presented to issue a public update on a motion delivered to the Governing Board relating to the implementation procedure of the Illumination Project Committee’s report. No action was required by the Assembly as the motion was referred to the Personnel and Legal Affairs Committee of the Governing Board.

The 2018 CBF General Assembly in Dallas continues through Friday, June 15, with workshops, worship and partnership opportunities exploring the theme of “Local Church. Global Church.” Find news, videos, photos and updates from the General Assembly at www.cbf.net/dallas2018. Watch the Facebook Live stream of all sessions here.

CBF is a Christian network that helps people put their faith to practice through ministry eff­orts, global missions and a broad community of support. The Fellowship’s mission is to serve Christians and churches as they discover and fulfill their God-g