Grace and Main Fellowship is an intentional community dedicated to practicing radical hospitality among Danville, Virginia’s most marginalized. So when they learned that co-leader Mike Wilkins had offered a bed to a local man experiencing homelessness, it was no surprise—that is until they discovered the bed was his own and he was sleeping on the floor of his house. 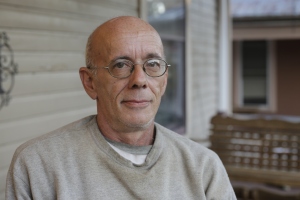 “Mike takes radical hospitality to another level,” Jessica Hearne, Cooperative Baptist Fellowship field personnel and a founding leader of Grace and Main Fellowship, said, “and he continues to push us in inspiring ways.”

Wilkins, a bread merchandiser by trade, is too humble to talk about his impact in Danville, so his friends help him out. He speaks only of the bizarre ways God has shown up in his life and moved him toward the city’s most vulnerable. One morning, while unloading his daily shipment at Wal-Mart, a friend approached him about donating spare bread for her new house guests—three homeless men she was hosting through the Grace and Main hospitality network. Wilkins heartily agreed and began leaving weekly bread deliveries on the front porch, for fear of disturbing the residents inside.

To the contrary, Bruce and Daniel, now leaders with Grace and Main, emerged one day during Wilkins’ delivery and struck up a conversation on the front porch. They regaled Wilkins with the story of Grace and Main, and invited him to help fix lunches to share with other homeless neighbors around town. Since that first sandwich, Wilkins has immersed himself in the life and work of Grace and Main as they eat, pray, provide shelter, seek justice and partner in renewing God’s world together. With support from the CBF Offering for Global Missions, Wilkins, the Hearnes and their community are cultivating beloved community with Danville’s most vulnerable, because that’s where Jesus is, Wilkins said.

“Jesus is with the forgotten people of the world,” he added.

“You can give to God’s storehouse every day of the year—and I did—but until you sit down and have a meal with somebody or make it your mission in life to help the marginalized, the less fortunate and the poor, that’s a very big difference. Grace and Main is one of the only organizations whose core mission is to help the marginalized, to help people with their rent and their groceries on an ongoing basis. It doesn’t matter who you are, we’re here to meet the needs of our brothers and sisters.”

Wilkins now serves as a pivotal leader in Grace and Main’s open community meals, urban garden project and hospitality network, which provides Danville’s homeless with a warm bed and empowers them with resources to get back on their feet. Wilkins first became part of the network after encountering a young man whose in-laws had disowned and abandoned him at the local Wal-Mart with no place to go. Wilkins took him in until he could find a new job and acquire his own housing. As he continues to provoke his friends toward more radical hospitality, even giving up his own bed, Wilkins regularly hosts three or four guests at his home, sometimes for months at a time.

Despite regularly attending Grace and Main’s Sunday night contemplative prayer service as well, Wilkins admits that the local church has not always been a place of grace or looked much like Jesus to him. Nonetheless, he loves to lead and read scripture on Sunday nights, and has even reconnected with his son, who now works alongside him and was even baptized by Grace and Main in 2017. With all that, Wilkins gives to inspire and lead his community; however, the power of Grace and Main, he says, has come in his own receiving of the gift of beloved community.

“I’ve never had a church family like this. I think they look after me more than I look after them,” Wilkins said.

“It’s like all that Grace and Main does is automatic. There’s no thinking to it. We’re here for each other. We love each other. We’re a community and I’ve never had that. It’s still sometimes hard for me to accept. The New Testament says to look to others’ interests as well as your own, because as you do that, God provides everything that you need, also.”

To partner with Grace and Main Fellowship as they continue to cultivate beloved community in Danville, visit www.graceandmain.org. To learn more and give to the CBF Offering for Global Missions at www.cbf.net/ogm.