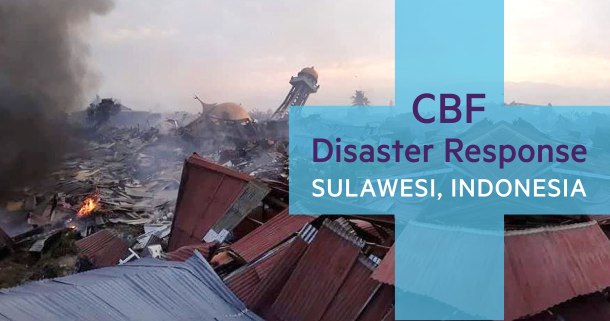 A major 7.5 magnitude earthquake struck the coastal city of Palu, Indonesia, at dusk on September 28, causing a devastating triple disaster.

The shallow earthquake created an intense shake force that collapsed two high rise hotels with near full occupancy, a shopping mall, and the newly-built hospital. Tens of thousands of homes were destroyed or damaged by the earthquake itself. But the worst was still to come. The shaking of the earthquake destabilized the soil causing soil liquefaction—a phenomenon which occurs when the soil loses its stability and mixes with the ground water, turning the earth into a churning flow of mud.

Three densely populated neighborhoods, with a total of more than 3,000 homes, were swallowed up into the earth, burying homes in 15 feet of mud. At least 5,000 people are feared to have been buried alive in this mud flow. Houses were moved up to a half a mile from their original location. Then, within minutes of the earthquake, three large tsunami waves up to 18 feet in height, hit the shoreline where people were gathered and setting up for an annual beach festival which was set to open that evening. There was literally no escape from the multiple destructive forces of nature. A Hollywood movie depicting the unfathomable destruction would have seemed overly dramatic in its apocalyptic imagery.

Further complicating the situation was the fact that this occurred in an isolated region of one of the more remote areas of Indonesia’s 17,000 island archipelago. 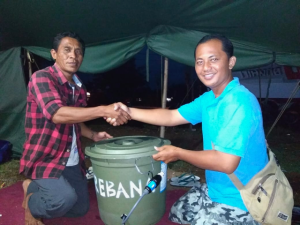 News was slow to come out and aid and assistance were even slower to arrive for the million people who were affected. As the Cooperative Baptist Fellowship’s coordinator for international disaster response, and a long-time resident of Indonesia, I immediately contacted the Indonesian Baptist relief and development organization, Rebana Indonesia.

There was already an early assessment team of two people headed to the disaster zone, but it would take them almost four days to reach the city due to the challenges in travel. Partnering Baptist organizations from around the world quickly mobilized through the Baptist Forum for Aid and Development (BFAD), an initiative of the Baptist World Alliance, to support Rebana Indonesia with technical and funding support. I traveled to Jakarta to meet with Rebana and to help sift through the reports, provide translation support, and develop a proposal to meet the immediate needs, while also planning for the long-term recovery.

It will take years for Palu and the surrounding region to recover and rebuild.

Through the Baptist Forum for Aid and Development, CBF and supporting Baptist organizations are combining resources and expertise as we all work together to provide the most effective relief and recovery effort for Palu. Through this BFAD network and partnership, CBF was able to get water filters to affected communities within the first week of the disaster.

I have participated in numerous Skype meetings to discuss the urgent situation on the ground and to decipher the best ways for us to support and assist Rebana Indonesia as they plan a two-and-a-half-year recovery program. Their long-range recovery program will include psycho-social trauma work, disaster risk reduction training, technical training on earthquake resistant home construction, and economic recovery initiatives.

Christians make up about 10 percent of the population of the region and the church is widely respected. Through the BFAD coalition of partnering agencies, Baptists around the world are able to more effectively support national Baptist efforts in disasters as they reach out and assist the survivors with the compassion of Christ. As we reach out to support the survivors of disasters around the world, we are also working to strengthen the capacity of national Baptists and their institutions so that they can be more effective in aiding their own communities in times of disaster.

Please give today to give emergency relief for the tsunami survivors in Indonesia. Your generous gift will provide emergency food rations, clean drinking water, and shelter for people who have nothing left. Give today at www.cbf.net/tsunami.

Eddy Ruble is a CBF field personnel serving alongside his wife, Cindy, in Malaysia and Indonesia. He also serves as the CBF coordinator for international disaster response.