At the time Minos Saint Amand met Cooperative Baptist Fellowship field personnel Jenny Jenkins, he was living on a dirt floor under poorly woven cloth supported by a few sturdy branches. Even so, he welcomed her to his plot in Petit Paradis, Haiti, with a radiant smile and began to recount his story.

When Minos Saint Amand met CBF field personnel Jenny Jenkins, he was living on a dirt floor under poorly woven cloth and in bad health.

Amand worked for decades as a gravel-maker, baker and farmer to sustain his family and pay for his two kids’ education. In 2009, his wife tragically passed away, leaving him alone to endure the ongoing dangers of kidney disease. Despite few resources, however, Amand now owns the fertile land on which he tends bananas, corn, yams, limes and mangos, and relishes the close proximity of his two grown children. Like so many fellow Haitians, Amand speaks only of God’s blessing as he addresses the puzzling mix of pain and paradise he has come to embody.

“God gave me a gift, and God is the one to be served,” Amand explained.

“I used to work in farming, and from it I paid for my children’s school. I planted corn, bread fruit, bananas, potatoes, cabbage and yams. It was my gift. When I was farming, I did not do anything else and I gave all the money to them. God is the one to be served, and these are the things I have to serve Him.”

It was high time to serve Amand, according to Jenkins, through the long-term presence and partnerships that CBF has cultivated since her commissioning in 2010. Supported by the CBF Offering for Global Missions, Jenkins’ work centers on creating relationships in rural Haiti through which she and local partners offer health clinics, rebuild homes and develop local education systems. Jenkins, a former oncology nurse, now helps Haiti’s most remote communities address a host of systemic obstacles, including a curable health crisis, fallout from natural disasters and a lack of educational opportunity. Through her new friendship with Amand, Jenkins quickly discovered his dream—a safe home in which to sleep and a clean bill of health. 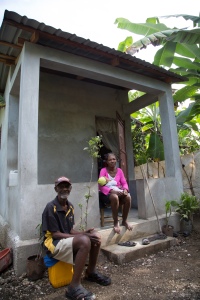 First Baptist Church in Forsyth, Ga., a CBF partner congregation, raised funds to construct a new home for Amand and, with Jenkins’ guidance and Amand’s leadership, did so through a sustainable partnership with a local construction team.

CBF Disaster Response had already yielded a willing partner in First Baptist Church, Forsyth, Ga., which raised twice the amount of money needed to construct a new home for Amand. Under Amand’s leadership, Jenkins then hired a local Haitian construction team to build a one-room house with thick walls and a stable roof. Instead of placing the house where his former lean-to had stood, however, Amand chose to build his new home among the banana trees as he had always dreamed. While Amand’s new home may seem like a quick-fix, Jenkins said, it required years of discerning where God was already working in Haiti and how to sustainably partner in that work.

“It requires time. It requires being in the community, learning about the community and understanding that there are no quick-fixes. As we’ve learned to listen and gotten to know people in this community, we hear what they have to share, what their needs are and the things they see. Then we’re able to start looking at ways to come alongside, to look at what they have and what they can build on; to determine how we can partner together to make those changes.”

To his family and friends’ dismay, Amand was rushed to the hospital in Port-au-Prince with renal failure just as the construction team was beginning work. For six months, Amand remained in Port-au-Prince as doctors helped restore his kidney function and helped him regain his mobility. Finally, Amand returned to Petit Paradis, where Jenkins and a visiting medical team took over treatment of his condition and brought Amand back to full health, not to mention to a brand-new home.

Amand has worked for decades as a farmer to sustain his family. Despite few resources, he now owns fertile land where he tends bananas, corn, yams, limes and mangos.

Amand, now 85-years-old, says his deepest hope is that his children will continue growing, have good jobs and be able to travel outside of Haiti. From his new home among the fruit trees, Amand, in good health, still tends his farm and says he has even more gratitude for his family, his new friends and a God who sustains him.

“I feel so much better, and I am so grateful to God for my house,” Amand said.

“Where I was before was not good. It was dirty. This is why I asked them to build the house here. Now I am so glad for it and so much more comfortable here. I receive it with an open heart and I am so grateful to God for it.”

Watch a video story about Saint Amand and Jenny Jenkins’ ministry below: