By Carrie Harris and Aaron Weaver

BIRMINGHAM, Ala.—The Cooperative Baptist Fellowship Governing Board met June 18 ahead of the 2019 General Assembly in Birmingham, Ala., to reflect on the past year, hear reports and welcome new CBF Executive Coordinator Paul Baxley and incoming CBF Moderator Kyle Reese.

“There’s much to celebrate in the life of CBF. The Spirit is doing beautiful things through us,” said Baxley, who shared reflections on his travels during the first three months of his service in the role of executive coordinator.

Baxley reported that since March he has traveled more than 14,00 miles, visited 12 states and participated in the spring gatherings of eight CBF state and regional organizations, and met with/spoke in 48 congregations.

“After 15 years of pastoring a congregation, it has been invigorating to worship with others in their congregations,” Baxley said. “It’s been beautiful to see the way the Spirit is at work.”

When Baxley was called to be the executive coordinator for the Fellowship, he outlined a vision for CBF focused on strengthening partnerships through strengthening congregations as well as reaffirming CBF’s unique commitment to global missions.

“There has been widespread energy in response to my vision I laid forth when I began my service,” Baxley noted, emphasizing the importance of cooperation.

“Everywhere I go, I see fruit, I see consequence, I see return—because of decisions that have been made around a table like this for years.”

CBF Moderator Gary Dollar centered his remarks to the Governing Board on their collective purpose—citing the purpose of the Church in Acts 2.

“In this chapter of Acts there was a purpose to the movement of the Spirit,” Dollar said. “As a Governing Board, we have a purpose. We have a point. I would argue to you that our purpose is not to keep an organization running…it is to empower individuals and churches to be the presence of Christ.

“We have to be open to experience a wild and free Spirit, so that we would become generous,” said Dollar, affirming that the Spirit moved among the Church in Acts so that everyone could hear the Good News in their own language.

“They heard the Gospel from their situation,” Dollar said. “This is our role as a board—that we are to speak the Gospel in their language that they might hear it, gathered together that we might do good work—doing things that allow the wild and free Spirit to move through us.”

Incoming CBF Moderator-Elect Carol McEntyre offered the board a prayer of gratitude for the wind of the Spirit that blew on Pentecost and continues to blow through CBF, asking that the Governing Board be granted wisdom, courage and creativity.

Kyle Reese, who will succeed Dollar as CBF Moderator at the conclusion of the 2019 General Assembly, shared his joy for the upcoming year.

“We have an exciting year ahead,” Reese said. “And we must begin to think strategically about how we move forward as the Cooperative Baptist Fellowship and bring more people around the table to pray and dream and strategize. Thank you for calling me to serve.

They also welcomed the following nominees to serve on the Governing Board. These individuals will be voted on by the Assembly during the June 21 “Fellowship at Work” session at 9:30 a.m.

The full slate of nominees submitted for approval at the Birmingham General Assembly Assembly from the CBF Nominating Committee are listed here.

For a complete list of events and workshops during the Birmingham General Assembly, view the 2019 Guidebook at http://www.cbf.net/guidebook2019. Keep up with news, photos and videos from the Birmingham Assembly throughout the week via Facebook, Twitter and at www.cbf.net/Birmingham2019. 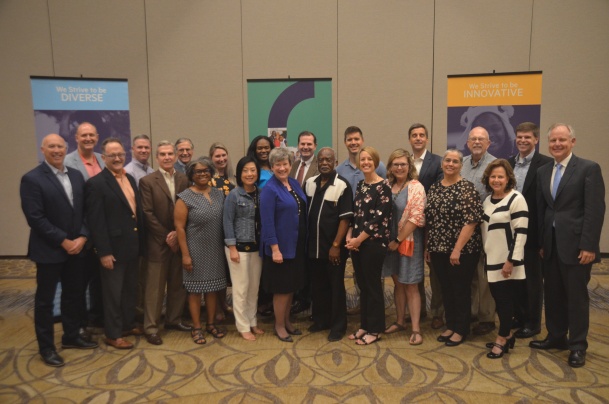