By Carrie Harris and Aaron Weaver

BIRMINGHAM, Ala.— The 2019 General Assembly of the Cooperative Baptist Fellowship opened Wednesday with a day focused on racial justice, including a worship service featuring testimonies from CBF pastors deeply engaged in the work toward racial justice and reconciliation.

For Buechel Park, the work of racial reconciliation and justice required rethinking and relearning around basic biblical stories of salvation and working against the knee-jerk reaction to “fix” things in their partner church.

“We have a long way to go but we’ve come so far,” Whitaker explained. “We have done the hard work of getting out of the land of comfort zones, crossing the sea of the stale, everyday ministry, and entering the wilderness where God shapes and forms a community who is always willing to risk failure for the sake of salvation.”

“My hope—and my fear—is that I’ll feel responsible,” the church member told Dickison.

This, and many other hopes and fears, are shared around tables of fellowship among these partner congregations, said Dickison, adding that the hard work of reconciliation started with Easter egg hunts, youth trips and potluck suppers—worshipping around tables and breaking bread together as all share hopes and fears. The pilgrimage to Montgomery brought these partners out from around the table, where they were confronted with their hopes and fears head on, he noted.

“My hope,” said Dickison, “is that this shared experience will lead us into the next phase of our covenant together, in which we at the First Baptist Church of Christ will need to dig deeper into this painful history in order to confront our painful present.”

This opening worship session of the 2019 General Assembly concluded with a time together around the table of communion to break bread and live into the hope brought in Christ.

Earlier in the day, a diverse group of Cooperative Baptists gathered at the historic 16th Street Baptist Church for the third summit of The Angela Project and a commemoration of the 400-year Anniversary of Black Enslavement.

The Angela Project was launched as part of a multi-denomination Baptist coalition led by Simmons College of Kentucky and including the National Baptist Convention of America International, Inc., The Progressive National Baptist Convention and the Cooperative Baptist Fellowship, and aims to help set a new trajectory for blacks in America through a collective commitment to racial justice.

CBF Executive Coordinator Paul Baxley welcomed attendees to the third summit of The Angela Project, reflecting on the sermon of Rev. Dr. Martin Luther King, Jr., at the funeral for the three victims of the 1963 bombing at 16th Street Baptist Church. 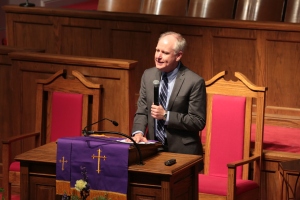 “Standing in this place, I can’t help but think of the words that Dr. King spoke at the funeral of three of the young women who died in the bombing of this church,” Baxley said. “Almost 60 years have passed since Dr. King spoke those words, and we as Cooperative Baptists are joined to the work of The Angela Project because honesty compels us to recognize that the dark of the storm has not yet passed.

“I wonder as we gather in this space today and as we listen to each other—I wonder how the risen Jesus and the Holy Spirit want to stir our consciousness.”

The blood of the four young girls who lost their lives in the bombing of the church, Baxley added, are to serve as a “redemptive force,” and call us to acknowledge that we live in a time where “photo ops and pulpit swaps are not enough.”

“How is the risen Jesus asking His Church—black, white—to partner together to bring a new day?,” Baxley asked. “There is still much to be done for Dr. King’s prayer in this place to be fulfilled. Today, we come to listen, to be challenged, to be remade.” 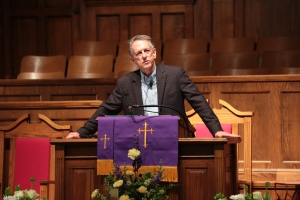 Joe Phelps, co-chair of Empower West Louisville and retired pastor of Highland Baptist Church in Louisville, Ky., challenged attendees by calling white Baptists to see what they have not seen.

“I’ve been a white man my whole life,” said Phelps. “The reality is that in the last three or four years I have realized that my objectivity on being white, Baptist and male has been distorted. I have been blind.”

Four years ago, Phelps joined Kevin Cosby, senior pastor of St. Stephen Church in Louisville and president of Simmons College of Kentucky, in creating Empower West Louisville, which was convened to bring together white and black citizens to empower the community in West Louisville.

“I won’t say that we are woke,” he said. “We aren’t woke, but we’re waking up. We’re seeing things we never saw. We’re curious about things we weren’t before. And we’re mad about some things. And I’m embarrassed.”

Phelps challenged white Baptists to engage in examining their history, to open their eyes to the profound effects of white privilege and think about ways to engage in reconciliation through repair, not just repentance.

“I challenge you all to think about how your church could make a repair of any wrong that’s been done,” Phelps said.

Cosby then addressed the crowd about concepts of justice in the Bible and how these should be applied, challenging white Christians to lead in justice and repair work for people who have been damaged by the legacy of slavery, Jim Crow, sharecropping, convict leasing and other racial injustices.

“Saying you’re sorry is not repair,” Cosby said. “Black people are suffering because of this legacy.”

While Cosby’s initial call to Joe Phelps was not to address the issue of race, it was a call in search of “S.O.B.s”—some other Baptists. The unlikely pair then began the conversation around what was most consequential to Cosby—black people. Through weekly conversations and deep engagement together, as well as coordinated discussions around challenging books, Empower West has become a powerful force for justice and for good in Louisville.

The Angela Project will continue with a panel discussion titled “Reflections of the 400th Year Commemoration of Black Enslavement and the Role the Church Should Play in Repair Work” during the June 20 workshop session of the CBF General Assembly in Birmingham, Ala.

Two individuals and three ministries were presented with the Emmanuel McCall Racial Justice Trailblazer Award during a Wednesday evening dinner. The dinner, hosted by CBF’s Pan African Koinonia (formerly known as the African American Network), spotlighted the work of the Dr. Emmanuel McCall Racial Justice and Leadership Initiative. Watch a video below to learn about the McCall Initiative:

Individual award recipients included Francis Ford, executive director of Sowing Seeds of Hope in Perry County, Ala., a social justice, health and wellness advocate. Rev. Sean Roberds, pastor of First Baptist Church in Herndon, Va., was recognized as a cultural change advocate. Watch videos below to learn more about the trailblazing ministry of Ford and Roberds:

Ministry organization recipients included CBF Arkansas for its advocacy on behalf of justice, equity and unity; Friends of Justice, an organization committed to reforming the criminal justice system through empowering local communities and working to hold public officials accountable for equal justice. Empower West also received a Trailblazer Award for its racial justice efforts in Louisville, Ky.
Watch the videos below to learn more about the racial justice advocacy of these organizations in the Fellowship: