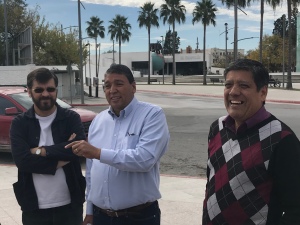 I recently returned from a week on the United States/Mexico border with other CBF state and regional leaders which we spent visiting and encouraging the ministries of Fellowship Southwest, CBF Texas and their partners. Flying into San Antonio, we drove southeast to Brownsville to begin our journey along the border, traveling as far north as Piedras Negras, Mexico, before returning to the airport. Everywhere we went, those we encountered both strengthened and challenged our faith.

On both sides of the border, we encountered pastors and lay leaders boldly answering the call to provide hospitality to weary and, at times, distraught refugees. The ministries they lead daily cross intimidating borders to meet the physical, emotional and spiritual needs of refugees who have sojourned for months. The bold faithfulness of these leaders challenged my faith each moment that we walked alongside them. But it was among refugees, most of whom are waiting for asylum hearings, full of hope, where I found my faith challenged most. 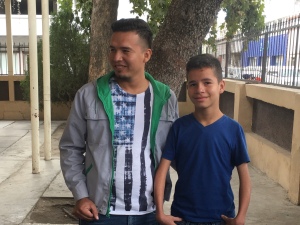 We heard the testimony of one father who shared a name with his 13-year-old son. Standing in the relatively safe space of a church in Piedras Negras, Mexico, he shared about their journey of faith from Honduras to the border. The son needs surgery on both hands, malformed since birth. As a result, he nearly lost his life while riding the “Beast,” the freight train refugees opt to take north from Central America in an effort to avoid encounters with gangs and to shorten the journey. Father and son hope to find work in the U.S. where they are free from extortion and threat of kidnapping. The father lives with the hope that his son might receive the medical attention he requires for full use of his hands. CBF’s bold faithfulness along the border provides hope for this family.

Standing in the kitchen of a safe house in Piedras Negras,  a woman shares her family’s journey and their reason for making it while everyone around shares in her grief. “I didn’t want to come here,” she says. “I have a masters degree and I loved my work in El Salvador, nurturing literacy in rural communities.” One day a gang confronted her and her colleagues, pulling aside her male colleague, interrogating him behind a house, and summarily executing him. The woman, her husband and little girl fled for their lives. They now wait for an asylum hearing, living with 80 others in a house designed to hold a single family. They wait and hope—esperanza. CBF’s bold faithfulness along the border provides hope for this family. 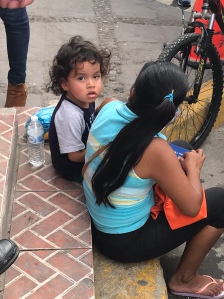 Later in the tour, while deliberating the subject and direction of my sermon for the following Sunday, it occurred to me that I could not speak about anything but this. I knew I must share my experience and the experience of these people. In a risky environment where there is potential to spin anything political, I must share what I have seen and heard, how I have seen God during the week, and how I have been formed, reformed and transformed as a result of it. My mind wanders to Jesus’ family as they attempted to flee the horrors of Herod’s corruption and murderous mandate. I am reminded of the God-given innate sense of urgency to move toward peace, especially when and where our children are involved. The holy family are refugees in solidarity with those I have had the privilege of meeting this week, many of whom are my brothers and sisters in Christ, all of whom are created in the image of God.

It’s a risk to take up their cause, to provide them hospitality in our current culture, to facilitate their journeys to opportunity and safety. As one ministry leader said, “It is our privilege to debate politics; in the meanwhile, they [the refugees] are here, on our doorstep, and God demands we tend his sheep.” Abiding in the margins is one of the many places where CBF excels at bold faithfulness.

Lord Jesus, strengthen the faith of those called to flee, and the boldness of those called to provide refuge in confusing, uncertain, dangerous and inhospitable places. Together, teach us to pray boldly for what seems impossible. Amen.

Rick Bennett serves as the coordinator for Tennessee CBF and is part of the Discovery Team for Toward Bold Faithfulness. Take the survey today at www.cbf.net/survey.