Bold faith involves getting comfortable with being uncomfortable. It requires consistently opening yourself to be in places, with people, and in situations that are beyond your experience and doing it all in the name of Christ. 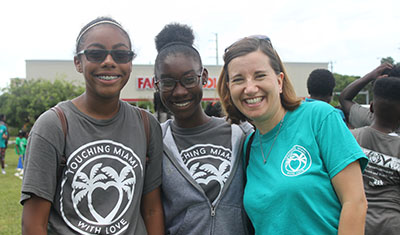 When my husband, Jason,  and I started out in urban ministry over 25 years ago, it seemed everywhere we went, everyone we encountered, and nearly every interaction we had were exercises in bold faith. We were intimidated by a new world we didn’t know and by people with understandings so vastly different from ours.

Over time, we learned names, stories, systems and networks. We became neighbors and built relationships that went beyond the transactional. We entered into pain and stood beside others in the face of injustices. We had bold faith that told us we could make a small impact in bringing the Kingdom a little closer to our neighborhood.

To us, bold faith has names and stories.

Names like Brittney, who was in grade school when she moved to Overtown with her grandmother and she and two sisters began attending Touching Miami with Love (TML). By the age of 14, Brittney was already showcasing her leadership skills. She became one

of our summer junior interns working in the children’s program. After graduating from high school, Brittney began volunteering at TML, which eventually led to a paid position as a receptionist. Our programs grew and, a few years later, we discovered the need for a program assistant. While Brittney served as program assistant, she learned to have bold faith in herself. Now five years into her staff tenure, we are excited to welcome her into her new role as office manager. Brittney is just one of the many young people we’ve been excited to walk alongside as they move with bold faith in their futures.

Angel Pittman is a CBF field personnel, who serves alongside her husband, Jason, as the Vice President of Touching Miami with Love. To learn more about and support TML, visit www.touchingmiamiwithlove.org. To take a step in bold faith with us through Toward Bold Faithfulness, take the survey at www.cbf.net/survey