A search committee made up of representatives of both the Cooperative Baptist Fellowship and the CBF Foundation has selected a nonprofit executive, fundraiser and leader in CBF life to fill a joint position of Foundation President and Chief Legacy Gifts Officer for CBF. 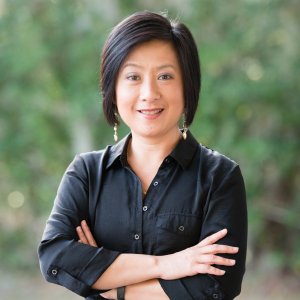 After a nationwide search, Shauw Chin Capps has been unanimously selected to fill the joint position. She will begin her work as President of the CBF Foundation/Chief Legacy Gifts Officer for CBF in March.

Prior to starting her most recent position at an Atlanta-based retained executive search firm, CarterBaldwin, recruiting nonprofit executives for global nonprofit organizations, Capps was CEO of Hopeful Horizons, a children’s advocacy, domestic violence and rape crisis center in Beaufort, S.C. Under her leadership, Hopeful Horizons expanded its scale, profile and effectiveness with successful fundraising and financial stewardship.

Capps earned her undergraduate degree from Baylor University and her Master’s degree from the Carver School of Social Work at the Southern Baptist Theological Seminary.

She is Cooperative Baptist to her core. While in Beaufort, S.C., Capps and her family were members of the Baptist Church of Beaufort, where her husband, Paul, was on staff. She has served in multiple roles of CBF leadership including the CBF Governing Board and as CBF Moderator in 2017. Shauw Chin and Paul are now members of Peachtree Baptist Church in Atlanta, Ga., where Paul is senior pastor. They have two daughters, Lydia and Phoebe.

Capps said she is humbled and honored to be able to serve her Fellowship family in this role.

“This journey has been unexpected but one that has filled me with much hope and excitement,” Capps said. “There is nothing more exciting than having a future orientation, especially when we know that God will be in that future.”

“As a nonprofit leader, I have had the joy of walking alongside donors and supporters, cultivating meaningful relationships that pave the way for generosity of gifts that give life to future generations. There is something holy about doing such work,” she said.

“While we don’t yet know what the future will look like, we want to equip our constituents with the resources to obtain new wine skins for the new wine God has in store for us. In the days ahead, I look forward to dream dreams with Cooperative Baptists, to steward those dreams and to pave the way for them to become reality.”

Capps continued: “Our Fellowship network exists today because of the cloud of witnesses who have gone before us and who understood the importance of sacrificially investing resources in future Kingdom work. They left their legacy with us and it is now our turn to faithfully invest in the future of our Fellowship so that the legacy of spreading the hope of Christ to the ends of the world will continue.”

For more than 25 years, CBF and the CBF Foundation have partnered to promote, receive, invest and manage long-term sustaining assets to support CBF mission and ministry causes. The Foundation is a trusted partner alongside churches and institutions as it works to establish and manage endowments and other legacy giving vehicles for the benefit of organizations.

CBF Executive Coordinator Paul Baxley said he is grateful Capps accepted this critical leadership role at the CBF Foundation and in the CBF community.

“Shauw Chin brings a unique set of gifts and experiences that equip her to work with the CBF Foundation Board to make our Foundation the best possible partner for CBF congregations and partner ministries,” Baxley said. “Her love for our Fellowship and her deep commitments to Global Missions, thriving congregations and opportunities for young Baptists to discover God’s call will enable her to help us raise funds to extend our mission and ministry into the future. I am eager to work with her to extend our shared mission and strengthen our congregations.”

Hal Bass, the chair of the CBF Foundation Board of Directors and a member of the search committee, said Capps will provide collaborative and transformative leadership in this new role.

“Under Shauw Chin’s direction, the Foundation’s services are readily available to advance the wide-ranging missions and ministries of our entire Fellowship community,” he said.

Carol McEntyre, pastor of First Baptist Church, Columbia, Mo., and CBF’s moderator-elect, served alongside Capps on the CBF Governing Board, and mentioned her passion “about the cause of Christ and about the gifts that the Cooperative Baptist Fellowship has to offer to the world.”

“I can’t imagine a better choice for the next president of the CBF Foundation than Shauw Chin Capps,” McEntyre said. “She has a heart for missions and call to serve Christ; she understands and loves CBF and is a gifted nonprofit leader. The Foundation will thrive under her leadership.”

“Shauw Chin Capps is a leader with vision, authenticity and deep faithfulness that will bless all of CBF through her work at the CBF Foundation,” Kieve said. “She knows how to lead an organization with effectiveness, integrity and in clear pursuit of its mission.”

“Shauw Chin will bring to this new role an abundance of gifts—her significant accomplishments as a leader in the nonprofit world, her successful fundraising experience, her invitational and relational spirit, and her long and deep connections within CBF life,” Durso said. “As President of the Foundation and Legacy Gifts Officer, she will move CBF to a new level of growth and good health. I am delighted that Shauw Chin has said ‘yes’ to this opportunity.”

“Shauw Chin is a visionary thinker who transformed her nonprofit by creating a merger of two organizations, expanding their reach while streamlining costs,” Burroughs said. “As the leader of a partner organization in CBF life, I am excited to watch Shauw Chin’s creative and visionary skills impact the growth of the CBF Foundation in the coming years.”

“She is who we are and aspire to be as Cooperative Baptists: passionate about justice and mission, committed to helping the Church thrive, and not only globally aware but globally shaped,” Cook said. “We want CBF to do great work in diverse contexts and doing that requires leaders who are capable of doing great work in diverse contexts. Shauw Chin brings that exact profile to her new role as President of the CBF Foundation.”

Assets under management in the CBF Foundation have eclipsed the $52-million mark in investments. In consultation with HighGround Advisors, the Foundation’s investment advisor and record-keeper, the Foundation is able to deliver best-in-class institutional investments and endowment service levels equal to or better than other foundations.

The Cooperative Baptist Fellowship is a Christian network that helps people put their faith to practice through ministry eff­orts, global missions and a broad community of support. The Fellowship’s mission is to serve Christians and churches as they discover and fulfill their God-given mission. Learn more at www.cbf.net.