Prompted by COVID-19, desperation is starting to sink into refugee camps on the border. Some immigrants are leaving the camps, others are moving to shelters, but not many are taking buses to Mexico’s southern border to return to their home countries. Worse, some are thinking about sending their children to enter the United States unaccompanied.

This is the somber humanitarian tragedy of the southern border:

Worry about these and other refugees hovers menacingly like, well, a pandemic.

For two weeks, I’ve advised immigrants at the border to procure their safety and security; later, they can care for their immigration cases. They must survive this pandemic first. Then we can talk about their options to enter to the United States. I’ve warned them about the risk and consequences of sending their children alone to the United States.

The state of Tamaulipas has 11 reported cases of coronavirus, and COVID-19 is spreading along the Mexican side of the border. Immigrants are most vulnerable. Who knows what will happen? Reporters and objective observers are rare. Rumors suggest human rights violations are escalating in the refugee camps. Swaths of the border are becoming a no-man’s land.

Are immigrants in U.S. detention in a better position than those waiting in Mexico? At least refugees in the camps are not in confinement, exposed to other detainees and forced to go to court without legal representation. Are they safe there? Several reports indicate the coronavirus has spread to detention centers. How are detainees faring?

I got up early this morning and to shop for food for my family for the coming weeks. As I drove to the supermarket, I wondered how many people are laid off in my city of  Harlingen, Texas. We are close to the border, and some workers are undocumented. I wouldn’t be able to estimate. I don’t walk around asking people their immigration status.

Still, how is it these undocumented immigrants can’t access benefits to provide for their families in these troubling times? Some of them paid their fair share of taxes, but they won’t get any stimulus checks. Is that how it works? Is there a moral issue in all of this? 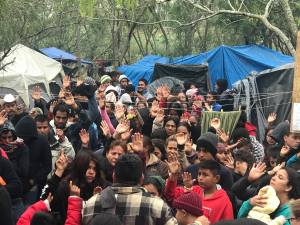 Moreover, can undocumented immigrants in my town run or hide? No. They can’t get on the highway and move away, because Customs and Border Protection checkpoints span the Rio Grande Valley. They can’t go back to Mexico either, because the border is closed. What should they do? How are they going to survive?

I came back home, took a shower and sat on my chair, only to remember about 27,000 U.S. healthcare workers who are saving lives all around our country are DACA recipients. A positive note, right? But their future is pending on the Supreme Court’s decision, yet to be announced.

At least I can go to the supermarket, hide in my home and write other people’s stories. Interestingly, Jesus didn’t write a book. Yet, there is a book written about Him. He was all about the action, about the redemptive story he could create in humanity’s most cruel time. I hope you remember the Romans.

He was all about not letting anything “perish” (John 3:16) or “be lost” (John 6:12). He was all for “the least of these” (Matthew 25:40). The Savior’s loving nature pushed him not to let anything or anyone “perish” or “be lost.” Ultimately, that’s what motivated him to give his life on the cross. (Hebrews 12:2). The joy set before Him—not letting anything or anyone be lost. He’s such a redeemer.

That same love should move us. Interpret our relative comfort from another perspective. What if there is a purpose for not letting anything or anyone be lost or perish in these COVID times? What if the question is: What can I do to become a witness of God’s love to those who are vulnerable?

Please don’t look at immigrant advocates as fanatics. Don’t disregard immigration issues, simply because they are foreign to your daily routine. Join us in helping “the least of these” during this season, they are more vulnerable than ever before.

They need Jesus. They need you and me.

Elket Rodríguez is an attorney and minister, and serves as the Cooperative Baptist Fellowship’s immigrant and refugee specialist. He lives on the U.S.-Mexico border, in Harlingen, Texas, and works with CBF Advocacy, CBF Global Missions and Fellowship Southwest.