In recent years, immigration has become a central and often divisive issue in American public life. Central American migrants, weary of violence and coercion in their home countries, have brought this pressing issue to our nation’s doorstep. To confront this challenge, people of faith across the United States, including Cooperative Baptists, have traveled hundreds of miles to advocate for and minister alongside asylum seekers at the southern border.

For all the campaigns and crises, however, we have missed the tens of thousands of refugees and immigrants who are resettling in communities throughout the country every day, according to Cooperative Baptist Fellowship field personnel Karen Morrow. In fact, global displacement is at an all-time high and, despite the turmoil at our southern border, 57 percent of the world’s 26 million refugees come from Afghanistan, Syria and South Sudan. Fort Worth, Texas—where Morrow partners with families who have been forced to flee their home countries—regularly resettled 1,500 each year, until the federal government sharply reduced resettlements by 70 percent in 2017.

Despite that reduction, Fort Worth now resettles about 400 refugees per year. Immigrants and refugees are all around us, Morrow said. “God is restoring to them an abundant life, as Jesus says in John 10, and we can partner in that work, right in our own communities,” she added. Farouq and Shiba relocated from Afghanistan to Fort Worth with their three children in 2015, and are investing in their children’s education in the United States first and foremost.

“When we first started working with refugees in Fort Worth, we found that large numbers were coming into the United States and yet there was little to no engagement from churches, and the churches didn’t even realize they were here, living among us,” said Morrow, who was commissioned as one of CBF’s field personnel in 1996.

Since arriving in Fort Worth in 2009, Morrow has been partnering with her community to extend hope and hospitality to refugees. The CBF Offering for Global Missions empowers her to form relationships with families fleeing violence or persecution, but also with local churches such as Bear Valley Community Church. Through those relationships, Morrow empowers newly-resettled families with early childhood education as well as adult English classes and helps them access housing, health care and cultural literacy.

Participants in the Ready for School program, an early childhood development curriculum Morrow developed to prepare newly-immigrated preschoolers and their parents for the American school system.

Most families spend 15 years or more in a refugee camp, according to Morrow, only to face new obstacles once they resettle in a city like Fort Worth. Speaking English, finding a job, visiting a doctor or even just buying groceries can be overwhelming. Yet, refugee parents continue to prioritize their children’s education above all, she said.

Farouq and Shiba shared that priority when they relocated their three children to Fort Worth from Afghanistan in 2015. Farouq’s contract with the U.S. Army had made them a target for the Taliban, not to mention the roadside bombs that kept their kids home from school for days. Reluctantly, the couple sought refugee status. Once in Fort Worth, Farouq, a dermatologist, discovered he was not licensed to practice in the U.S. and would have to return to school. But school can wait, Farouq said. For now, he and Shiba are investing in their children’s education instead.

They began by enrolling their 3-year-old son, Ali, in Ready for School, an early childhood curriculum Morrow developed to prepare newly-immigrated preschoolers and their parents for the American school system. Located in five apartment communities, Ready for School is a 20-week curriculum designed to expose non-English speaking preschoolers to shapes, numbers, colors and above all, English literature. Teachers work one-on-one with students and an accompanying parent to facilitate ongoing learning outside the classroom.

From the comfort of their own apartment community, Ali and Shiba attended weekly sessions led by experienced volunteer teachers, such as Caroline Bell. Bell worked as a kindergarten teacher for 36 years and now volunteers with Morrow and Ready for School in her retirement. She says Ready for School engaged her desire for mission and for seeing children like Ali become more confident, socially as well as academically. And Ali did become more confident, Farouq said. After only a few sessions, he was adapting quickly to a new language and learning environment. 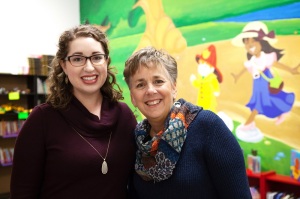 (Left) Julia Bauman, associate pastor of community life at Bear Valley Community Church, alongside Karen Morrow at Hope Library, which her church helped bring to life in partnership with Broadway Baptist Church, Church of the Crossing, and Kingdom Manifestors Church.

“He was going with my wife in order to feel comfortable,” Farouq said. “Then after a few days, my wife explained that Ali had a wonderful teacher there, that he’s learning faster with this teacher and that he feels very comfortable. One day, Karen brought some supplementary stuff for my son, some books, and my wife started a friendship with her. We’ve gotten a lot of support from Karen for our jobs, our education programs and the schooling system.”

In 2017, Morrow formed together with local partners to expand preschool education, as parents requested more help learning and teaching their children English, Morrow explained. That’s when Kingdom Manifestors Church, located directly across the street from a populous refugee community, volunteered to host a free library. Bear Valley Community Church had already begun serving in that same community and also felt uniquely called to empower refugee families with literature, said pastor Julia Bauman. Together with Fort Worth’s Broadway Baptist Church and Church of the Crossing, they collected, labeled and catalogued more than 5,000 books.

Hope Library, located inside Kingdom Manifestors Church, now opens every Monday evening to children and their families. And while the library inspires their mastery of English, it also provides a space of empowerment for children who are often marginalized or bullied at school, Bauman explained. She and her congregation continue to serve as reading partners each Monday night; yet the children are learning to be their own reading partners, she said.

Karen Morrow serves as a reading partner at Hope Library, located inside Kingdom Manifestors Church, which opens every Monday evening to refugee children and families.

“We met with the African Refugee Empowerment Group, and they helped us learn how to operate the library in a way that’s empowering,” Bauman said. “We’re not here to show children ‘how to do it.’ We’re here to resource them to rise up, be leaders and even read to other children. We’re just partners. One little boy wasn’t recognizing any words and couldn’t really sit still, but just a couple weeks ago he was reading to another child. We see so much growth and excitement about reading.”

In addition to early childhood education, Morrow also partners with adult refugees as they learn English and seek resources for higher education, housing and health care. Many refugees, especially women, become extremely isolated in the U.S. because they can’t communicate in English, she noted. That’s why she began teaching ESL classes for women in one of South Fort Worth’s refugee communities. Ali’s mother, Shiba, started attending and is beginning to speak some English. Once she can communicate fluently, Shiba will finally be able to shop for groceries, make new friends and pick her kids up from school, she said.

Rosalie mastered English nearly 20 years ago when her family fled the Democratic Republic of Congo and resettled in the United States. Yet, 12 years at a refugee camp in Tanzania postponed her education as a teenager. When she met Morrow in 2012, she was applying to study social work at the University of Texas at Arlington. So Morrow accompanied her to the admissions office to explore scholarships and other financial aid. When Rosalie had her second child, Morrow provided a booster seat and access to baby and kids’ clothes. Her three sons even attend Ready for School at Hope Library, which is transforming their lives, she said. When she finishes school, Rosalie plans to pursue a Master of Social Work degree and help transform refugees’ lives as Morrow and so many others did hers.

Karen Morrow with Rosalie, whom she met in 2012 as she was applying to study social work at the University of Texas at Arlington.

“It’s amazing to see where I have come from and where I am now, and all the people who helped me get here,” she said. “They showed me ways to navigate all the milestones. That’s why I want to be a social worker, because I know how valuable it is to have support. My focus is health and hospital social work. I want to help people get the resources they need to succeed in life and overcome all the obstacles they’re facing.”

The CBF Offering for Global Missions ensures that all CBF field personnel can be fully present and form trusted relationships with refugees like Rosalie, Shiba and Ali, Morrow emphasized. Rebuilding and restoring hope is a long-term process. Morrow and parents are constantly devising new ways to make the resettlement transition easier for families. And families continue to arrive in Fort Worth from Afghanistan, Iraq, the Democratic Republic of Congo and other conflict zones across the world. When you give to the CBF Offering for Global Missions, you become a partner in restoring an abundant life to those families, Morrow explained.

“Giving to the Offering for Global Missions supports my presence here in Fort Worth, serving among refugees,” she said. “Without that, I wouldn’t get to share these life moments with them. Your gift will prepare a newly-immigrated child for school. Your gift will allow a mother to learn English and adjust to life in the United States. God is rebuilding their lives and restoring hope, and we get to join God in that process.”

Watch videos about the impact of the Ready for School program and Karen Morrow’s ministry below.

This article appeared in the  Spring 2020 issue of fellowship! magazine, the quarterly publication of the Cooperative Baptist Fellowship. Read online here and subscribe for free to fellowship! and CBF’s weekly e-newsletter fellowship! weekly at www.cbf.net/subscribe.